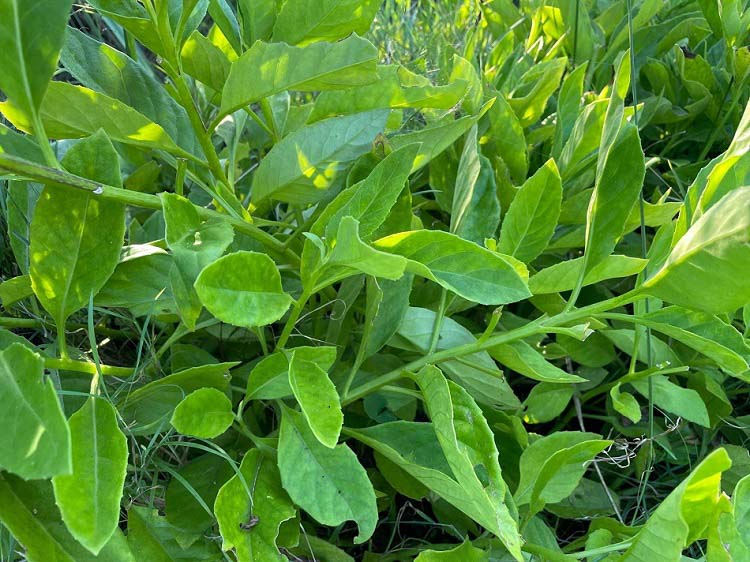 Longevity spinach, Gynura procumbens, is one of the plants everyone should grow. It is not only tasting delicious, and grows super quickly so can be used as biomass in your garden, but it also has many health benefits. According to Tan HL et al, “Gynura procumbens (Lour.) Merr. (Family Asteraceae) is a medicinal plant commonly found in tropical Asia countries such as China, Thailand, Indonesia, Malaysia, and Vietnam. Traditionally, it is widely used in many different countries for the treatment of a wide variety of health ailments such as kidney discomfort, rheumatism, diabetes mellitus, constipation, and hypertension.”(Tan HL et al, 2016)

Having Gynura procumbens in your garden is like having your own pharmacy! This, by the way, applies to many other plants which we grow in our food forest. Check my other articles and our online shop as we sell some of them, too.

Gynura procumbens comes from Asia, and even though it is a tropical plant, it may be grown nearly everywhere. It loves shade and half-shade and will adapt to nearly any climate if you keep it out of frost by growing in a pot during a cold winter. You can even grow it inside or on your balcony in pots, too. The Gynura procumbens was one of the first edibles we had in abundance within a very short time after planting, and because it grows so easy and super quick, we can enjoy it in many ways:

Gynura procumbens is also being sold as a powder and considered a superfood, but there is no need to pay for the powder or to make the powder when you can enjoy it all year round! And yes! We are selling this plant in our online shop, too!

Do you have any questions or comments about this amazing plant? Consider joining our discussion board on our website. It’s free!

This website uses cookies to improve your experience while you navigate through the website. Out of these, the cookies that are categorized as necessary are stored on your browser as they are essential for the working of basic functionalities of the website. We also use third-party cookies that help us analyze and understand how you use this website. These cookies will be stored in your browser only with your consent. You also have the option to opt-out of these cookies. But opting out of some of these cookies may affect your browsing experience.
Necessary Always Enabled
Necessary cookies are absolutely essential for the website to function properly. This category only includes cookies that ensures basic functionalities and security features of the website. These cookies do not store any personal information.
Non-necessary
Any cookies that may not be particularly necessary for the website to function and is used specifically to collect user personal data via analytics, ads, other embedded contents are termed as non-necessary cookies. It is mandatory to procure user consent prior to running these cookies on your website.
SAVE & ACCEPT
x

This Site Is Protected By
Shield Security →